About the Saffron Walden Reporter


The Saffron Walden Reporter covers the thriving market town of Saffron Walden and its surrounding villages from as far south as Stansted veering east to Steeple Bumpstead and west to Duddenhoe End. It also covers areas South Cambridgeshire including Duxford, Whittlesford and Ickleton.


The free weekly paper, which is delivered to 16,530 homes (ABC figures January-June 2013) is packed with the best news, entertainment and sport.


The Reporter covers a broad range of issues, from the 33 and 101 engineer regiments (EOD) based at Carver Barracks and Saffron Walden Community Hospital to Stansted Airport and its expansion plans to tourist attractions such as Mountfitchet Castle, Audley End House & Gardens, Linton Zoo and Duxford Imperial War Museum.


The Reporter is a much-loved community newspaper and campaigns for the rights of people in the area. It is delivered every Thursday and has a regularly updated website at saffronwaldenreporter24.co.uk 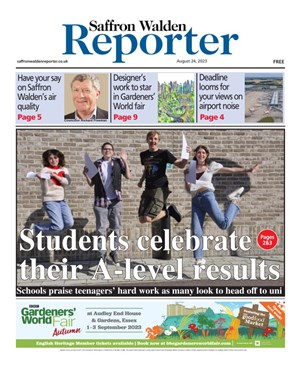